The USPTO Myriad Guidance, And How A Claim Invention Is Determined Eligible Subject Matter

**A full-length article on understanding the Guidance and prosecution strategies for the applicant in complying with the Guidance can be found at the BSKB website here:

Part II – explaining how to determine whether the claim as a whole recites eligible subject matter (something significantly different than a judicial exception);

Part IV – providing a new form paragraph to be used when rejecting claims in accordance with this guidance. 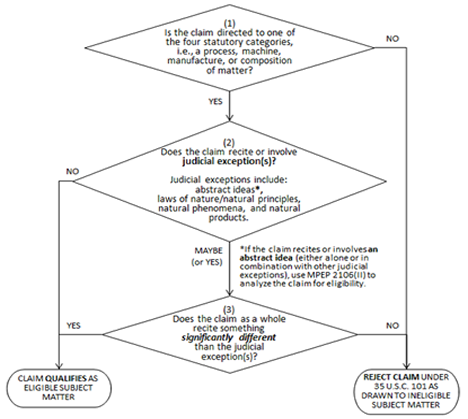 The Guidance states that terms like “isolated” or “purified” will not suffice for patent eligibility, where Example B contains such a claim.  Example B presents Claim 1 of “Purified amazonic acid.”  The facts include how purified amazonic acid is structurally identical to the amazonic acid in the leaves.  In applying the various factors, the Guidance explains that “… the claim as a whole does not recite something significantly different than the natural product, e.g., the claim does not include elements in addition to the judicial exception that add significantly more to the judicial exceptions, and also does not include features that demonstrate that the recited product is markedly different from what exists in nature.”

But a concern here is that a structural difference from the natural product is needed for claim 1 to satisfy § 101, where reciting “isolated” does not make claim 1 eligible subject matter.  It is believed by some that this was not the holding in Myriad or Mayo.  For instance, in Myriad, the BRCA1 gene had been defined in terms of its informational content (as encoded in the gene), and there was no alteration of the genetic (chemical) structure of the DNA. The USPTO Example does not take into account the function or use of the claimed subject matter, or what was needed to isolate the amazonic acid from nature.  The analysis of a function or use resides in previous Supreme Court and other federal case law.  Thus, there is a question whether the claimed subject matter as a whole is truly being analyzed here. At the same time, the amazonic acid example in the Guidelines could be read to suggest that a method of treatment claim using a naturally existing product can only be eligible if the claim also recites some dosage limitations.

A problem with the various Examples is that a really broad claim 1 is presented, followed by a very narrow dependent claim.  The applicant will want to know what happens when the claim scope is in between the two such claims (sort of a grey area).

On May 9, 2014, the USPTO heard comments from the public, which continues to be critical of the Guidance going too far and overreaching of the holdings in the Supreme Court decisions. There is a chance the USPTO might amend the Guidance materials to include functional differences as a basis to overcome a § 101 issue, rather than just focus on structural differences.  The USPTO has set June 30, 2014 as a deadline for receiving comments from the public on the Guidance.

**A full-length article on understanding and prosecution strategies for the applicant in complying with the Guidance can be found at the BSKB website here: